Where? Where? Wedgie! Citizen science for endangered eagle populations 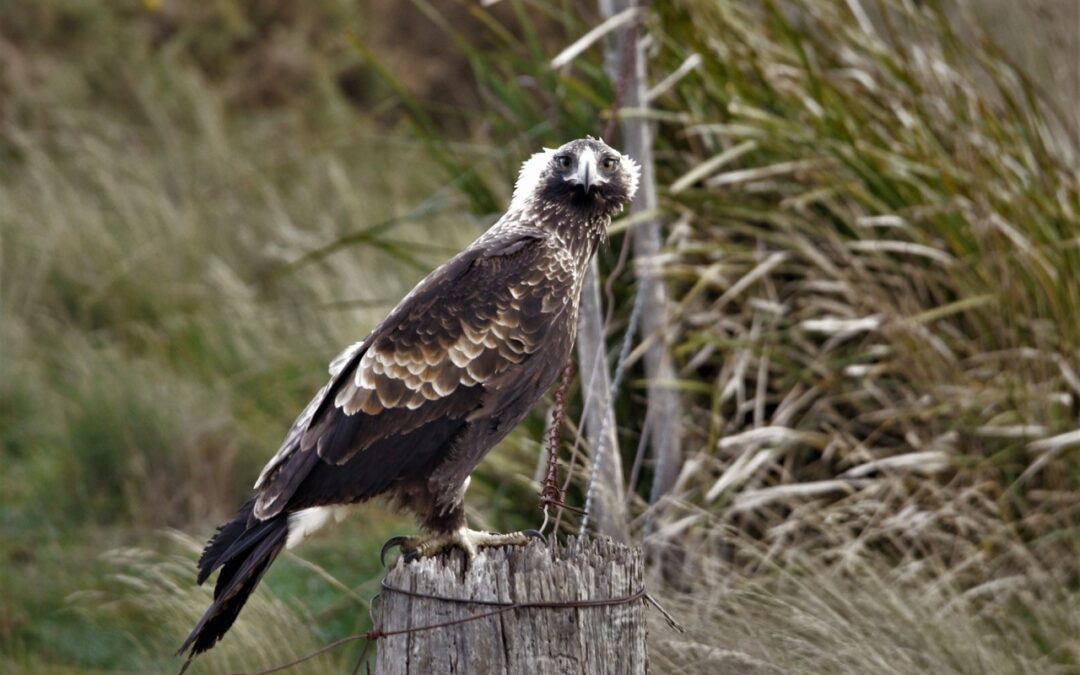 The rise of citizen science, enabled by the internet, digital photography, and new data analysis techniques, is a boon for scientists who are tracking species populations – particularly with species that are easily identifiable by non-experts. With more people involved, larger areas can be surveyed, making this an efficient way of investigating macro-scale patterns.

Since 2018, ecologist Dr Clare Hawkins has been working with not-for-profit organisation the Bookend Trust on a citizen science project Where? Where? Wedgie! to collect data about the Tasmanian wedge-tailed eagle (Aquila audax fleayi). One of the world’s largest birds of prey, the Tasmanian wedge-tailed eagle was listed as Endangered in the 1990s, when the adult population was estimated at less than 1000 individuals.

Dr Hawkins explains, “Unlike some mainland wedge-tailed eagles, all Tasmanian wedge-tailed eagles are extremely sensitive to disturbance when breeding. Even the most pro-wildlife people can bring about breeding failure if they’re unaware of the issues – perhaps permanently through, say, building a house in the bush, but also each year through things like intrusive photography. Eagles also face a host of other threats: land use can erode breeding or foraging habitats, collisions with infrastructure or vehicles, electrocution, environmental poisons and occasionally shooting. There are lots of costly efforts to reduce these threats, but we don’t know if they’re working – is the population recovering?”

Where? Where? Wedgie! involves schools, community groups and interested individuals, who conduct surveys over six days each year to collect data about eagle numbers across Tasmania. Its aim is to conduct large-scale, long-term monitoring to detect changes in population size; information that is crucial to manage and protect wedge-tailed eagles.

In contrast to traditional ecological research, citizen science is as much about social science as it is about the data collected by the volunteers. The Where? Where? Wedgie! researchers needed to work out how to recruit enough volunteers to collect the required data, how best to provide training information to volunteers and how to motivate people to stay involved over the long term.

“We promote the work on social and traditional media, through schools, crowd-funding campaigns and live events. About 1.5% of the population of Tasmania has now heard about the project in face-to-face interactions through school and community outreach efforts, and over 1000 people have registered their interest in volunteering,” Hawkins says.

Hawkins emphasises that a wonderful added benefit of the approach, which the social science is also exploring, is its capacity to communicate science and conservation issues to participants and their contacts. 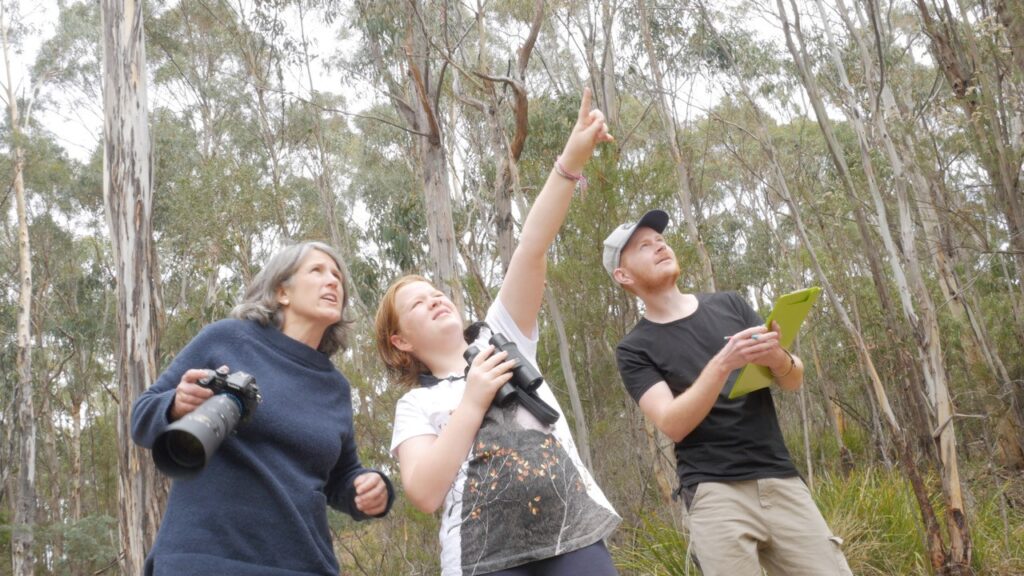 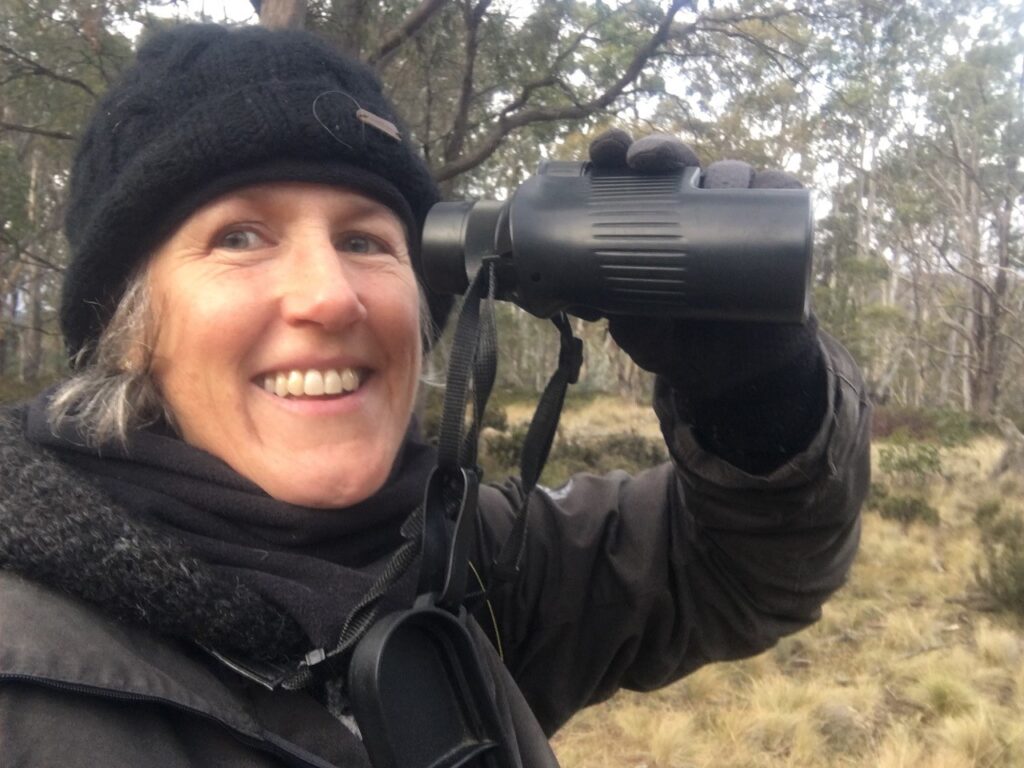 Dr Clare Hawkins doing the 2019 survey in square 2001 – it was chilly but charming! – covering Steppes and the Lagoon of Islands

Of course, with novel methods of data collection come new challenges. The stricter the method, the fewer volunteers may be willing to take part. However, research projects that rely on unstructured, opportunistic data collection have less capacity to detect population declines. Surveys without a robust structure may, for example, end up clustered in densely populated areas where people live, or a single area might be surveyed by many people.

Given the choice, many volunteers might elect to survey an area known to be inhabited by wedge-tailed eagles, resulting in data that gives the impression that eagles are much more widely distributed than they really are. Surveying areas with no eagles might be less appealing for volunteers, but to draw meaningful conclusions from the data, information about absence is just as important as eagle sightings.

To foster an even spread of sampling, Hawkins and her team divided a map of Tasmania into 4 km x 4 km squares and highlighted every third square as “available for survey”. Volunteers were required to register online and book a square to survey, using a standardised protocol, over two predetermined weekends in May.

To acknowledge the importance of consistent sampling over a range of areas, including locations where no eagles were sighted, volunteers who did not record any sightings during their survey were celebrated as the “zero heroes” on social media and other communication. “It is vital that people report their data, even when they don’t see anything,” Hawkins explains. “The surveys that record no eagles matter hugely: how can we know if a species is rare if we don’t hear about where it’s rare?”

What about the problem of identification by non-experts? Volunteers were given training in the form of workshops, educational videos and a raptor identification guide. “Wedge-tailed eagles are quite distinctive-looking birds but are sometimes confused with another species, the swamp harrier,” Dr Hawkins notes. “A key reason that we set the survey weekends for May, when most swamp harriers leave Tasmania for the winter.” Volunteers upload their data, including photos of birds sighted, via the ProofSafe app. Experts examine the photos to check the identity of the birds, and the results have been encouraging, with a large majority of identifications being confirmed.

Even with the best possible survey design, data in citizen science projects has its own quirks that need to be addressed during data analysis. The square-booking system goes some way towards encouraging an even spatial spread of data, but nevertheless, in the first survey year, 2018, many squares were surveyed in populated areas while gaps remained in remote and rural areas. In 2019 and 2020 the researchers placed tighter restrictions on square selection, which resulted in a more even spread of effort. They also increased their social media campaign efforts to promote the delights of exploring remote and rural areas.

There are other potential issues to watch out for too, according to Dr Hawkins, such as volunteers occasionally failing to complete their surveys: “It’s possible that some people might decide to stop after having seen an eagle, or after having failed to see any and lost heart. Not everyone involved is fully across the scientific design.” To avoid bias, these records are excluded from analysis.

But many factors that affect the data can be accounted for with data analysis methods known as occupancy modelling. Occupancy modelling, a branch of statistics that has exploded in recent decades, can account for variation in detectability of birds due to factors such as the size, age and experience of the team of volunteers, and environmental variables – for example, the presence of mist or hills obscuring the view.

“Occupancy modelling essentially addresses the question: if no eagles are sighted at a particular location, how sure can we be that are really no eagles there? In other words, how sure can we be that a reported absence is not just due to low detectability?” explains Hawkins. “Repeat visits to a survey location give researchers information about what proportion of surveys typically detect or miss a bird. The more times an area is surveyed, the more certain we can be about the accuracy of the presence/absence data they are getting.” 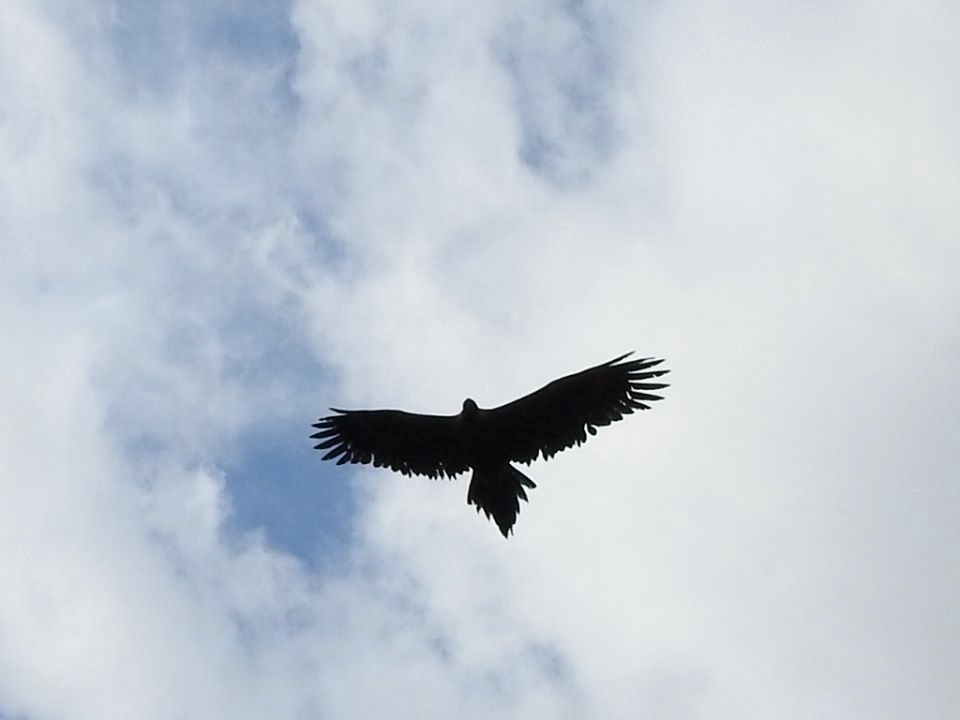 What can this data tell us about eagle populations?

Researchers use “occupancy”, or the estimated probability of each survey square being occupied by an eagle during the survey, as an indicator of population size. Analysis of data that has been collected so far shows that with the number of surveys conducted, the team could confidently pick up a change in occupancy of 42%. In real terms, this means that if the population of 1000 eagles had dropped to 580 or fewer from 2019 to 2020, the surveys would be extremely likely to have detected a decline. But if a smaller decline had occurred, the researchers would have been unlikely to pick it up.

While the data collected to date can only detect fairly dramatic changes, Dr Hawkins says it will be possible to detect much smaller changes with more data – either as the data accumulates over the years, as trends over time, or from year to year with greater sampling effort (surveys over more days each year or in a greater number of squares throughout the state). With only a few extra squares surveyed for two days each year, for example, it will be possible to detect changes of 30% between two years.

The ongoing collection of data over multiple years will provide valuable insights into how the eagle population is responding to our conservation efforts and whether more or different actions are needed to protect this endangered species.