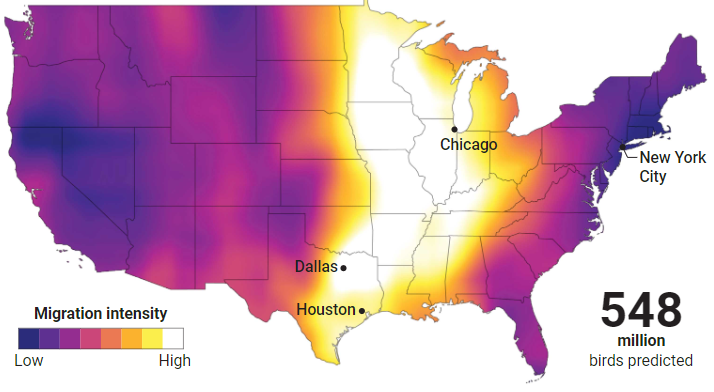 Every 11 September at dusk, in memory of the 2001 attacks, New York City mounts the Tribute in Light, an art installation in lower Manhattan. And every year, as twin towers of light bloom skyward, they attract thousands of migrating birds, sucking in warblers, seabirds, and thrushes—along with predators such as peregrine falcons eager to take advantage of the confusion. On each anniversary, bird conservationists wait below, counting and listening to disoriented chirps. If the observers report too many birds circling aimlessly in the beams, organizers flip off the lights.

In recent years, on-site observers have also used a complementary tool to quantify the orbiting birds: weather radar, which bounces off birds as well as raindrops. In 2017, a group led by Cornell University ornithologist Andrew Farnsworth found that during seven previous anniversaries, the once-a-year installation had attracted a total of about 1.1 million birds. Within 20 minutes of lighting up, up to 16,000 birds crammed themselves into a half-kilometer radius. But when the lights flicked off, the dense clouds of birds on the radar screen dissipated just as fast, a finding later confirmed by on-site thermal cameras.